The way we perceive our body and our surroundings is a function of the way our brain interprets signals from our various sensory systems, such as sight, sound, and in the case of “motion simulation”, touch.  If a motion simulation causes motion sickness, it’s typically because something in the human body isn’t fooled by the simulation.   How the simulator is designed might be causing the problem, but in every case, human senses are extremely sensitive and complex.

Postural stability is maintained through the vestibular reflexes acting on the neck and limbs. These reflexes, which are key to successful motion synchronization, are under the control of three classes of sensory input:

Proprioceptors are receptors located in your muscles, tendons, joints and the inner ear, which send signals to the brain regarding the body’s position. An example of a “popular” proprioceptor often mentioned by aircraft pilots and race car drivers, is the “seat of the pants”.

Proprioceptors respond to stimuli generated by muscle movement and muscle tension. Signals generated by exteroceptors and proprioceptors are carried by sensory neurons or nerves and are called electrochemical signals. When a neuron receives such a signal, it sends it on to an adjacent neuron through a bridge called a synapse. A synapse “sparks” the impulse between neurons through electrical and chemical means. These sensory signals are processed by the brain and spinal cord, which then respond with motor signals that travel along motor nerves. Motor neurons, with their special fibers, carry these signals to muscles, which are instructed to either contract or relax.

In other words, these sensors present a picture to your brain as to where you are in space as external forces act on your body. For example, picture yourself sitting at a red traffic light in your car. The light changes to green and your foot presses the accelerator. As you accelerate away from the traffic light, you will “feel” yourself being pushed back in to the seat. That experience is transmitted to your brain via the proprioceptors, in particular, through the sensors in your backside and back. The brain interprets this information as an acceleration in the forward sense. If you now slam on the brakes to stop suddenly, you will find different proprioceptors at work. The deceleration will be felt through your hands and feet and your backside will now be trying to slide forward in the seat. This information is again presented to your brain and thus it interprets the deceleration taking place. In turn, the brain now signals the muscles in your arms and legs to contract and stop you from sliding forward in the seat. A similar sensation will take place when you turn a corner. If you turn left, your body will slide across the seat toward the right and vice versa for a turn to the right.

A washout allows the motion simulation occupant to think they are making a continuous movement when actually the motion has stopped. Since there are restrictions on the range of motion for any motion simulation, there are some movements which it cannot physically complete. When the craft is turning around completely, for instance, the motion system completes the first part of the turn and then slides the platform back into the neutral platform position. The old position data is thus “washed out”. In other words, washout is where the motion simulator actually returns to a central, home, or reference position in anticipation of the next movement. This movement back to neutral must occur without the occupant actually realizing what is happening. It is an important aspect in motion simulations as the human feel sensations must be as close to real as possible.

The Vestibular System is the balancing and equilibrium system of the body that includes the vestibular organs, ocular system, and muscular system. The vestibular system is contained in the inner ear. It consists of three semicircular canals, or tubes, arranged at right angles to one another. In space, there are three planes that we can move through, forward/backward (longitudinally), left/right (laterally), and up/down (vertically), and there is one canal assigned to detect movement in each plane. Each canal is partially filled with fluid and has a series of hair follicles which stand vertically inside each tube. The fluid rotation in the yaw, pitch, and roll axes. When acceleration takes place in a particular direction, the fluid in the appropriate canal is displaced which in turn causes the hair follicles to move. The movement of the hairs is interpreted by the brain as an acceleration. 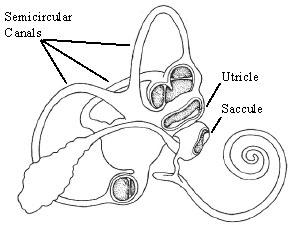 Three semicircular canals are orthogonal and deal with angular turns. The saccule with vertical linear
movement, the utricle with horizontal movement.

There is however a short coming to this clever piece of biological engineering. If sustained acceleration (10 – 20 seconds) takes place in one direction, the fluid in the appropriate canal also remains continually displaced. As a result, the hair follicles will eventually return to the vertical position and the brain will perceive that the acceleration has stopped. In addition, there is a fixed acceleration threshold when the semicircular canals cannot sense any motion at all. During rotational motion, spatial disorientation can occur, (also referred to as “the leans”),when movement is below the threshold of sensitivity for the semicircular canal. threshold of sensitivity is approximately 2 degrees per second. In other words, slow and gradual enough motion below the threshold will not affect the vestibular system. This fact allows the washout movement to be effective, as the system is unable to interpret continued or sustained acceleration. As long as the simulator moves at a speed below the threshold at which the human body can sense motion, the occupant will be totally unaware that this washout movement has taken place. During washout movements, the human sense of sight takes over and interprets the games visual output into the body and craft position.

Our ears are the most important source of information in motion simulation. They send pictures to the brain about the craft’s position, velocity, and attitude relative to the ground. As a result, it is equally important that the motion works in direct synchronization to what is happening on the video output screen.   When you roll the control to the left, your craft relative to the scenery displayed on the visual projector, also rolls left. Simultaneously you must also feel yourself, through the body’s proprioceptors and vestibular system, turn to the left. If this doesn’t occur in real time, motion sickness can occur.

We use cookies on our website to give you the most relevant experience by remembering your preferences and repeat visits. By clicking “Accept”, you consent to the use of ALL the cookies.
Do not sell my personal information.
Cookie SettingsAccept
Manage consent

This website uses cookies to improve your experience while you navigate through the website. Out of these, the cookies that are categorized as necessary are stored on your browser as they are essential for the working of basic functionalities of the website. We also use third-party cookies that help us analyze and understand how you use this website. These cookies will be stored in your browser only with your consent. You also have the option to opt-out of these cookies. But opting out of some of these cookies may affect your browsing experience.
Necessary Always Enabled
Necessary cookies are absolutely essential for the website to function properly. These cookies ensure basic functionalities and security features of the website, anonymously.
Functional
Functional cookies help to perform certain functionalities like sharing the content of the website on social media platforms, collect feedbacks, and other third-party features.
Performance
Performance cookies are used to understand and analyze the key performance indexes of the website which helps in delivering a better user experience for the visitors.
Analytics
Analytical cookies are used to understand how visitors interact with the website. These cookies help provide information on metrics the number of visitors, bounce rate, traffic source, etc.
Advertisement
Advertisement cookies are used to provide visitors with relevant ads and marketing campaigns. These cookies track visitors across websites and collect information to provide customized ads.
Others
Other uncategorized cookies are those that are being analyzed and have not been classified into a category as yet.
SAVE & ACCEPT
Translate »
Scroll to Top