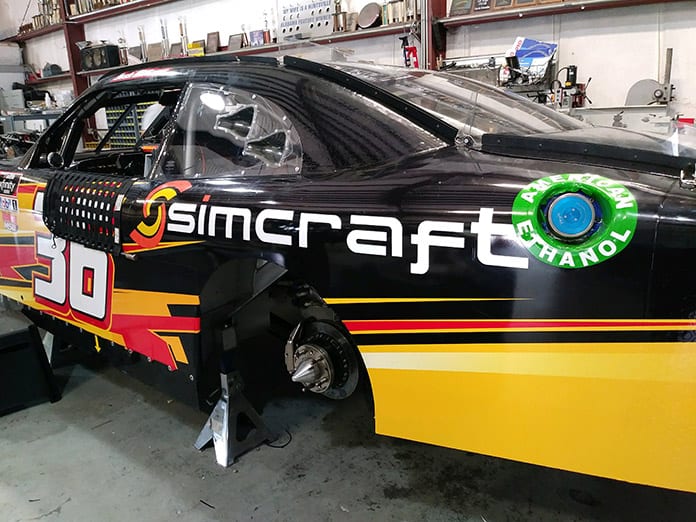 HAMPTON, Ga. – Josh Williams and DGM Racing have announced a partnership with SimCraft, an industry leader in racing simulation equipment and motion simulation technology, in the NASCAR Xfinity Series.

As part of the association, SimCraft will be featured as the primary sponsor of Williams’ No. 36 Chevrolet Camaro during Saturday’s Rinnai 250 at Atlanta Motor Speedway, the first time that SimCraft has served in a major sponsorship capacity with Williams.

SimCraft will be an associate partner of Williams throughout the season, and Williams will also become a part of the SimCraft family of drivers as a brand ambassador as well.

“I’ve been friends with the folks at SimCraft, going back quite a while,” explained Williams. “We did some (trade) shows and other appearances with them in the past, and now it’s really cool to bring them into the sport in a way that gets their brand out to a little bit of a different demographic, maybe, than what they’ve been able to reach in the past.

“With iRacing and eSports being really popular right now, it’s a great fit, I feel like,” Williams added. “They have the best feel, the best fit and the best feedback of any simulation product that I’ve used in my career, for sure. I’m excited to help them widen their horizons this weekend in Atlanta.”

SimCraft founder and Chief Technology Officer Sean Patrick MacDonald sees multiple ways that his company’s support of Williams is beneficial to both parties.

“SimCraft is very proud and excited to support Josh Williams and the No. 36 team this weekend,” said MacDonald. “The unique fit between Josh and SimCraft intersects at the entire team’s ability and skillset to connect their sponsors to businesses, as well as consumers. SimCraft’s versatile motion technology and diverse product and service offerings afford us the opportunity to market as both a B2B and B2C solution provider.

“To illustrate, we market our driver development and engineering products in the APEX3, APEX4, APEX5, and the full motion APEX6 state of the art simulators to professional racing organizations, and at the same time can repackage the same motion technology into smaller lower cost products for consumers. No other racing simulation equipment or technology company can do that,” MacDonald noted. “In supporting Josh and the NASCAR Xfinity Series this weekend, we have a distinct opportunity to move both the B2B and B2C aspects of our business forward.”

Williams is coming off a positive run during the season opener at Daytona Int’l Speedway, where the box score didn’t reflect the speed of his No. 36 Chevrolet Camaro.

The 25-year-old finished 22nd, but ran among the leaders at several points and was as high as sixth.

“We were definitely pleased with the speed that we showed in Daytona, even if the final result didn’t reflect how we ran,” said Williams. “We know we have some things to work on to make the car better for Talladega, between strengthening our motor package and then some small things with the car itself, but we’re happy. We just tried to do something different in laying back and the wrecks never happened.

“I feel like we’ve started the year in a strong place on the superspeedway side; now we just have to carry that momentum forward as we start the bulk of our season off this weekend in Atlanta.”

We use cookies on our website to give you the most relevant experience by remembering your preferences and repeat visits. By clicking “Accept”, you consent to the use of ALL the cookies.
Do not sell my personal information.
Cookie SettingsAccept
Manage consent

This website uses cookies to improve your experience while you navigate through the website. Out of these, the cookies that are categorized as necessary are stored on your browser as they are essential for the working of basic functionalities of the website. We also use third-party cookies that help us analyze and understand how you use this website. These cookies will be stored in your browser only with your consent. You also have the option to opt-out of these cookies. But opting out of some of these cookies may affect your browsing experience.
Necessary Always Enabled
Necessary cookies are absolutely essential for the website to function properly. These cookies ensure basic functionalities and security features of the website, anonymously.
Functional
Functional cookies help to perform certain functionalities like sharing the content of the website on social media platforms, collect feedbacks, and other third-party features.
Performance
Performance cookies are used to understand and analyze the key performance indexes of the website which helps in delivering a better user experience for the visitors.
Analytics
Analytical cookies are used to understand how visitors interact with the website. These cookies help provide information on metrics the number of visitors, bounce rate, traffic source, etc.
Advertisement
Advertisement cookies are used to provide visitors with relevant ads and marketing campaigns. These cookies track visitors across websites and collect information to provide customized ads.
Others
Other uncategorized cookies are those that are being analyzed and have not been classified into a category as yet.
SAVE & ACCEPT
Translate »
Scroll to Top